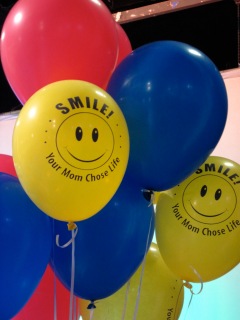 After learning more about the injustice of abortion on Friday and Saturday, it was time to put our beliefs into action on Sunday afternoon! We headed down to the Santa Monica Promenade for our die-in after attending mass on Sunday morning.

Wondering what a die-in is? Well, a die-in is a form of pro-life activism, and a great way to get people involved in the revolution!!

We first spread out in a public area. When the leader shouts “die” the participants drop to the ground. Others quickly come and use chalk to outline the bodies, like a murder scene. The people on the ground are covered with long red cloths symbolizing the blood of abortion. While all that is happening, someone announces to the public what’s happening and others pass out literature to passerby. The great thing about die-ins is that there are many ways you can participate – definitely a way for everyone to be involved!

As my first die-in experience, this went pretty well. I passed out literature, and was greeted with countless sour facial expressions and people who were too busy to give a care about those being affected by abortion. I got plenty of exercise darting around the sidewalks, keeping a big smile on while handing out the literature, and praying for the people who swore at us and made false claims about what we were doing. 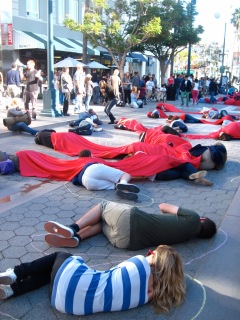 Like I said earlier, this was my first experience with this kind of pro-life activism. It was incredible how many people were disgusted by our non-violent presence that day. I mean, what’s so offensive about random teenagers laying on the ground? I was left a bit incredulous at some of the responses to the activism, but I guess I shouldn’t have been. When you do not have truth on your side, how could you possibly respond with anything but empty lies and false claims based on more lies? 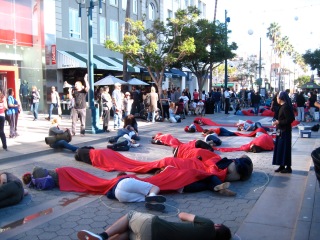 I was told throughout the day that I was stupid, and too young to know anything. A father walking with his about 7 year old daughter told her “They’re not making a difference”. Many expressed how disgusting we were, and that it was so ridiculous because you can’t even get an abortion until you’re 18. One person took the literature and tore it, throwing it at my feet. I could write a whole novel about just these reactions, and the people at the promenade!

These responses were rather hateful, but it made me realize that when you do not have truth on your side, you do not have any other way to respond. When scientific facts and not so common sense do not agree with your point of view, you are left with lies, and nothing logical to back your point of view. I am not discouraged by these responses, and I know I’ll hear a lot more and more hateful comments in the future. They motivate me to continue working to expose the lies of the culture of death, and bring light to our darkened world.

Are you ready to stand up and bring light to our world even if it is uncomfortable and you are ridiculed?

What a gift it is to be known, chosen, and cherished so deeply. While I could write endless pages about the adventure, challenge, and beauty of finding our vocation in each other and building the most incredible relationship in my life, I also just stand in silent awe and wonder in gratitude for what God has done in our lives. The answer to my years of prayers has a face and a name and all that I can really say is:
49th anniversary of a made up ‘right’ to end innocent lives. 18th annual Walk for Life West Coast. Last year helping run it. One day I hope to see the first day of my lifetime when abortion is no longer legal. It was a gorgeous sunny day to walk the streets of San Francisco in defense of the most innocent and vulnerable among us. Their legal protection should be a no-brainer!
“When does life begin?” is not a philosophical question.
Josh and I are so excited to share our engagement! Discerning God’s call in our lives has provided many memories and adventures, which we are so grateful for. We look forward to building a life together and a new chapter beginning next summer! 🎉❤️🎉
CLOSED
G I V E A W A Y CLOSED. Congratulations @judytreehugger1 !