According to the media, Pope Francis is a flaming liberal. Do you need to wipe the coffee off your computer? Good. Use a paper towel. I was laughing too when I read that.

Ever since he was elected earlier this year, people have been throwing around articles talking about how he’s going to change the “rules”. He’s progressive after all, didn’t you know? And a Jesuit. Maybe that’s where it came from originally . . . After the initial hoopla of excited people stopped waiting for him to make  a decree that abortion, gay “marriage” and birth control are A-okay, this interview came out earlier this week. He basically said that we need to steer away from hot button issues like the ones I mentioned, and go to the heart of Christianity: hope and healing.

And then the media reported that he was telling the Church to lay off its conservative values.

I find it rather humorous that the media still thinks Pope Francis is some sort of king or president who could sweep in and change what the Church is all about. They only report things that they can misinterpret (ie. “Who am I to judge?”) and take them totally out of context. He thinks mercy and Jesus-lovin’ are super important? Well, hello! Apparently that means abortion, gay “marriage” and birth control are okay! Whoohoo!

Cue the celebration from NARAL (one of the most pro-abortion organizations out there):

I honestly did start laughing when I read through the comments on that picture. People started talking about pigs flying and hell freezing over because holy cow, look what Pope Francis did! And I’m like: 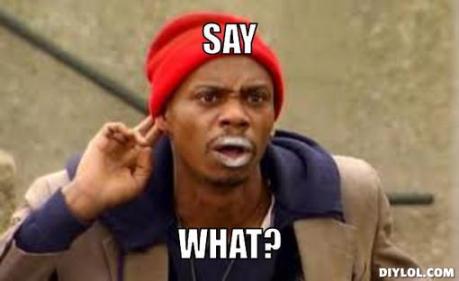 He made a beautiful point, though. And it challenged me. After all, I talk about abortion a LOT. The pro-life movement is pretty much my life, and people who see that sometimes think I’m crazy. Obsessed perhaps? I prefer the term highly passionate. I had to sit down and think about it:

Of course life is important. We wouldn’t be here if we were all aborted. And we should fight to stop abortion. But if you think about it, the world already knows what the Church teaches. The might think we’re crazy. But they know we’re against abortion, birth control, and gay “marriage”. By urging us to find a new balance, Pope Francis is challenging us to engage the world in a new way. I think it fits well with Benedictine’s theme of the year to “Be the Light”.

We are the light and salt of the earth, after all, and I think many Catholics have lost that. We go to Mass because we’re supposed to, right? Hopefully we learn the basics and receive first communion and so forth. But do we really appreciate how flippin’ awesome our Church is?!?!?!

We educate, feed, and medically treat more people than any other organization. We are responsible for the education system. We have beast saints who have dedicated their lives to God as an example for the rest of us. We are the only ones with the sacrament of reconciliation through which the lost are led back to Christ.

There are so many beautiful things about our faith that we have lost in the battle for hot button issues.

Personally, I’ve grown to appreciate my faith so much more since coming to Benedictine. Students here are on FAYAH (aka fire) for God. It’s beautiful. It’s inspiring. Being here makes we want to become more holy and learn more about Catholicism. The theme last year (Be courageous, be faithful, be strong) and this year (Be the light) remind me that while abortion is important, it is our eternal salvation – and the battle to shine the light on people’s souls – that is most important. You can’t be pro-life without believing that life is sacred. And how do you know life is sacred? By recognizing your own worth and beauty first. That’s what the Church is all about. We’ve got to start somewhere.

It’s time to get back to the foundation of our faith like Pope Francis said. Jesus is the heart of our faith, and it’s time to show the world that we are more than people who are against abortion. We are the Easter people: the light and salt of the earth. We are here for a purpose. We are here to touch lives, inspire conversion, and be a witness to the beauty of God.