What’s more lighthearted and joyful to talk about than politics nowadays?

But talk about it we shall. It’s been hard to figure out this election cycle, so here’s how I’m approaching it. 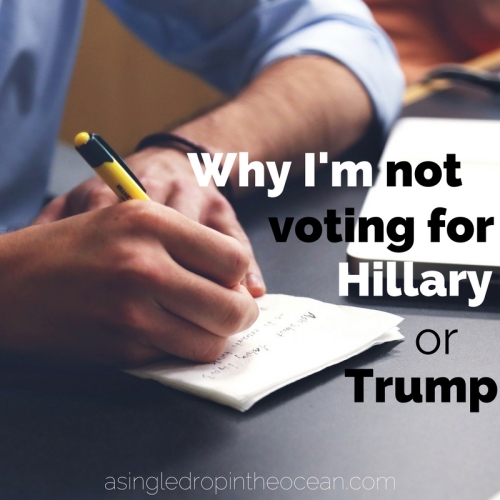 The first thing I consider when voting for a candidate for any position is whether or not they respect the dignity of the human person. If the person in question supports direct attacks on human life, they automatically don’t get my vote. I don’t care if they have a stellar economic vision if they can’t respect everyone’s right to life. #SorryNotSorry

If the candidate passes that basic test, I will look at their stance on a variety on social issues. Then I will move to economic strategies, foreign policy, and the list goes on. But let’s be real. Most politicians don’t get that far in my process.

Because this is my process, Hillary Clinton never was and never will be someone I vote for (barring a major conversion). She is in favor of abortion on demand and shares Planned Parenthood’s worldview that some people are not as important as others. She’s also a criminal, so there’s that. Not voting for her was an easy decision.

Now the harder part. Long before the candidates were official, I seriously wondered if Trump running for president was a joke. I mean, what filthy rich business honcho runs for president? Apparently he does.

When I realized he would be the republican nominee, I lost what little faith I had in our political system. And I decided to eventually drop my affiliation with the republican party. The two party system doesn’t make sense to me at this point in history, because I think it divides us against each other when we need to work on electing people who will unite as many people as possible. Even though this means I won’t be able to vote for republican candidates in future primaries as a Californian, I’m just not willing to be affiliated with a group of people I don’t belong with.

The obvious decision would be to vote for Trump then, right?

I understand the reasoning some people are using to justify voting for Trump:

I will not endorse deporting people who allegedly don’t belong here.

I will not endorse building a wall to keep people out.

I will not endorse nuking people nonchalantly.

I will not endorse killing the innocent wives and families of terrorists.

I will not endorse flipflopping on the issues most important to me.

Even if endorsing these things meant changing SCOTUS to be more in favor of my moral beliefs, I won’t vote for someone so reprehensibly against what I stand for to get one good thing.

Many people I know are deciding what to do. Some will not vote. And some, like me, will write in a candidate as a protest vote. I’m not sure who yet (feel free to recommend people in the comments), but that’s what I’m doing.

Agree or disagree, I’d love to hear how you vote. Tell me I’m wrong, tell me who you’re voting for, let me hear it!