Have you been keeping up with the news lately? Like many people, I got used to news coming from what friends and pages post on Facebook. But that’s obviously biased depending on who you follow, not to mention tiring and incomplete. So recently I asked for podcast suggestions for fair daily news! Here are three I’ve been listening to mostly daily, which I recommend:

The Daily (New York Times): this is the most biased of the three and I do slightly roll my eyes at times. But it’s mostly fine, and usually goes deeper into one topic than try to cover all of them equally. It’s a little over 20 minutes.

The Newsworthy with Erica Mandy: she covers a nice variety of topics and stays factual, which is awesome, in under 10 minutes.

Up First (NPR): this is pretty similar to the last one in that it covers a wide variety, but is focused a bit more on politics. It’s usually around 10 minutes.

Do you know of others to suggest?

On a more personal note, last weekend I hosted a paint and sip! I’ve been hosting monthly game nights/get togethers to meet and get to know local young adults with my sister (which have been met with extremely variable results). We painted along to a Bob Ross episode, which I think was a great format. The one we did was called Mystic Mountains if you want to try your hand. Here’s my finished product! 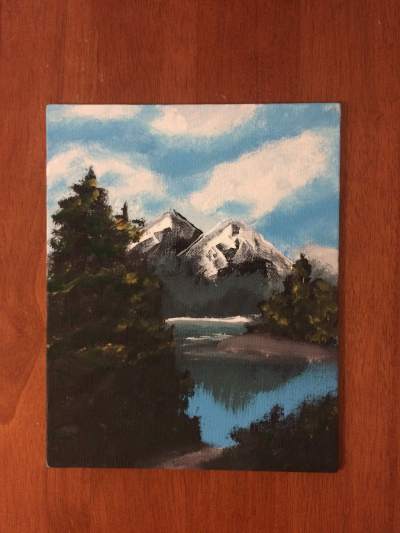 Other things I’ve been up to? Sharing Freedom’s Calling – a blog series commemorating Humanae Vitae’s anniversary with real life stories! We only have the final post left. Can you believe it’s already almost over?! Check out the first in the series here, and you can go from there to each one. Would love to hear your feedback.

The Supreme Court was BUSY this week. They decided 5-4 that pregnancy resource centers here in CA could not be forced to notify clients of where to go for state-funded abortions. Does that not seem obvious? I find it chilling that four justices don’t see a problem with compelled speech. Justice Kennedy did not mince words. He said:

“It does appear that viewpoint discrimination is inherent in the design and structure of this Act [the law SCOTUS repealed]. This law is a paradigmatic example of the serious threat presented when government seeks to impose its own message in the place of individual speech, thought, and expression. For here the State requires primarily pro-life pregnancy centers to promote the State’s own preferred message advertising abortions. This compels individuals to contradict their most deeply held beliefs, beliefs grounded in basic philosophical, ethical, or religious precepts, or all of these…

The California Legislature included in its official history the congratulatory statement that the Act was part of California’s legacy of “forward thinking.”. But it is not forward thinking to force individuals to “be an instrument for fostering public adherence to an ideological point of view [they] fin[d] unacceptable.”

Oh, and speaking of Justice Kennedy: Did you hear he’s retiring? This is huge since Trump will likely appoint a more reasonable and moderately-minded judge than one Hillary Clinton would have. I know many people who voted for Trump despite their reservations on his character did so for precisely this reason (though I didn’t vote for him or Hillary), and I’d honestly feel pretty validated right about now if that were me. This will certainly have a significant impact in coming years.

Aaaanyway. Okay, last political thing for now: immigration. I’ve been watching and reading about it all. I even wrote out a long 7QT, but decided not to publish it. I just find the issue incredibly nuanced and difficult, and most people incapable of thinking or speaking about it reasonably. And I’d like to be a reasonable person. Would you like to discuss next week? I might make it next week’s 7QT, but enjoy how these are usually more fun. Let me know if there are any certain aspects you’d like to see addressed.

Super exciting summer plans: do you have any? I usually don’t do anything crazy big, especially now working full time. BUT. Next month I’m going to the island of Guam with a sister and my grandparents (where they’re from). I am so pumped to see all the family history and experience the culture and meet relatives and visit what will probably be the best beaches I’ll ever see. I can’t even believe it and will definitely be sharing some pictures after the fact.

Oooh! I didn’t share about the recent quick weekend trip to Mount Shasta. It was quite gorgeous, and a great place for fresh air in the mountains. 10/10 recommend getting outside more.

This is a view of Mount Shasta from the shore of nearby Lake Siskiyou. I walked around the entire lake (~7 miles) with a friend, which was so peaceful and nice.

That’s it for now. For more 7 Quick Takes, head over to Kelly’s place. Tell me all about your summer, recent reads, trips, and politics in the comments here!