On January 22, 1973 abortion became legal in our country. On that day each year, pro-lifers renew their passion for the movement, and dedicate another year to fighting the evil of abortion in our country (But not for long! Pretty soon we’re going to use the day to celebrate the end of abortion!). Some people think we’re crazy for fighting for this long…

“I cannot believe that it’s January 2012, almost 39 years to the day that the right to abortion was decided by the U.S. Supreme Court, and we’re still having a conversation about the access to and legality of female reproductive health services.”

…But I don’t think we’re the crazy ones. If people had gotten tired of fighting to end slavery, would there still be slaves in America? Giving up is not an option for pro-lifers. Our fight will not end until the day when ALL life is protected, and abortion no longer slithers through our land like the evil snake it is.

The pro-life movement grows stronger each day with more youth getting involved, and more people becoming aware of the tragedy of abortion. We see this growth each year at the Walk for Life in San Francisco, CA, and the March for Life in Washington D.C. 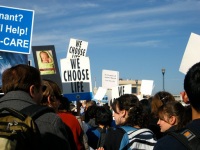 Last year over 50,000 pro-life warriors marched in CA, and 300,000 in D.C. It’s incredible how much these numbers have grown over the years! Pictures from the events show people as far as you can see – an ocean of people standing up for life.

Have you been to the WFL or MFL before? Are you planning to go this year?

Last year was my first time going to the Walk for Life, and it’s a hard experience to describe. I was truly one in a sea of people (drop in the ocean, eh?). The energy was palpable as we walked for something we all believed in with our whole hearts. Have you ever experienced that before? It’s at a moment like that when I know for certain that God is walking right next to us, urging us on. I am filled with hope, and moved to do more for life. I am at a loss for words when I try to describe this feeling of knowing that I am at the exact right place, at the exact right time, so I guess you’ll have to experience it for yourself.

Come and join us in this battle for life. I can’t say it’s going to be easy, but hey, life isn’t easy. Be courageous.

“Courage is not the absence of fear, but rather the judgement that something else is more important than fear.” ~Ambrose Redmoon

I’d say fighting for life is way more important than being afraid of how hard it will be. Fear is doubting your ability to succeed, but we cannot do anything but succeed with God on our side.

We’ve fought for life for 39 years now, and aren’t about to stop. Are you in?