I really appreciate nice people. Why am I saying this? Because today I had an adventure: the goal was to get gas cards (which we’re using to reimburse people who drive to the abortion clinic). Who in the world would think this would be hard? Hmmm, not me!

I had to gas up myself, so I popped in to see if that station sold gas cards: nope. Okay, next one: hmmm, only huge dollar amounts. So then I went to Walmart to see if they had something (or maybe something like an American Express card). They were all in too large dollar amounts. Time for CVS! No luck there either. So then I went to another gas station, and they didn’t have them. Yay. BUT they told me their other station in town (who knew Atchison had so many?!?!?!) did. So I went there (after calling a friend because I am not good at following verbal directions and got “lost”), and they had 2 smaller certificates and 3 bigger ones. I needed at least 10 of an in-between amount. So……the nice lady told me that she was sorry and told me that if I wanted I could go outside to where the owner lady was sitting with garage sale items (keepin’ it classy in Atchison).

I went out, and she was the nicest lady ever. They couldn’t print more, but she printed receipts and did something special and hand wrote a dozen gift certificates for me. Turns out she graduated from Benedictine. And when she asked what I was majoring in, she half-kidding offered to sell her business to me. Alrightie then. Moral of the story: don’t give up, people. And be that nice person if you have the opportunity.

That crazy adventure would not have been possible with out my lovely car, which I have dubbed Fernando (after much deliberation). I went and titled/registered him the other day, and so we’ve been joking about how he’s legal now (don’t worry, I had a permit before). The radio is rather enjoyable, I might add. 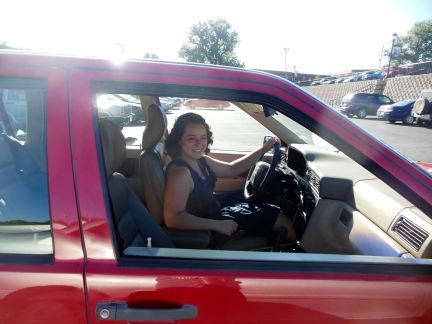 Our first abortion clinic trip is tomorrow morning! I have no clue how many people there will be, but after our first all-club meeting (which had a great turnout), it should be good.

Classes are plugging along. Quantitative analysis is basically reviewing high school algebra, so it’s not hard. Principles of management is fun and interesting. Developmental psychology is AWESOME, and we’ve been talking about babies (prenatal to newborn) for the last few classes. Macroeconomics is bad. We have a test coming up next week, and I have plans to visit the tutor first. Concert chorale is super fun, and our pops concert (in a few weeks) is going to sound epic. Accounting is not as bad as I thought, and is rather logical. I just have to get the terminology down.

Planning cheap meals can be fun. Last week we made a nice meal for $2.50/person (made of chicken, broccoli, potatoes, and cookies). I can’t wait til it’s colder and we can experiment with crock pot meals!

On the 8th, Benedictine was consecrated to Mary. It was awesome. Other than the fact that it was blazing hot and we all turned into sweaty puddle of grossness during the procession, it was fabulous. And beautiful. I love being at such a passionately Catholic school. Speaking of that, I met with our president, one of our priests, and our faculty advisor for RRL. It is so beautiful to be at a place that is so supportive of life, and I have been so encouraged by these people.

This week was our fire drill! We kept anticipating it, and now it is over. Hurray. It was nowhere near as bad as least year. Last year we had strobe lights and an insanely loud noise kind of like when a huge door in a factory is closing. Does that make any sense? Well, this one is more like a regular alarm in a home. We all got out in a little over 2 1/2 minutes I believe. Anyway, It’s time for bed. We’re getting up early, and going on an adventure in Kansas City after praying at the abortion clinic. The weather has cooled down a bit, so it should be nice. Life is awesome right now, and I’m hoping to get a few things written this week (and continue working on my goals). Stay tuned!

P.S. I just saw a note from WordPress saying some readers might see adds on my blog (because I haven’t paid for them not to). If you see adds on here, could you pretty please let me know? I want to make sure that doesn’t interfere with anything 🙂