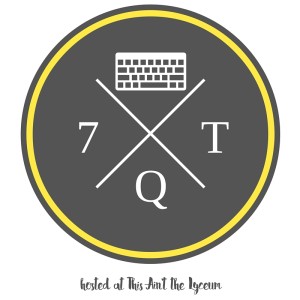 Hello again! It’s Friday. Did you survive this week? Because it was  extremely cray cray if you ask me. Let’s take a deep breath, maybe a chill pill, and pull ourselves together. Linking up with Kelly & Co.

1. Donald Trump is our next president. Ever think that’d happen? The shock has worn off at this point, but I was dumbfounded on my couch watching the results unfold. I said from the beginning that Hillary was going to win, and for once I am a teensy bit glad to be wrong.

2. But, like most Americans, I’m not thrilled about Trump. I didn’t vote for him or Hillary, because they both seemed like dumb options. But I’m not going to protest or disrespect my country. He’s said crazy things that I wouldn’t ever defend. But I’m going to give him a chance to do some good. He might. He might not. But I’m going to be open-minded enough to give him the opportunity. He can’t just do the crazy things people are saying he will. We’re a democracy, not a monarchy.

3. Some people are losing their minds and blocking freeways and hurting people. This is obviously very constructive in unifying our country. All the rest I’ve gotta say about the protests is this:

4. This video (from a liberal Australian channel?) came up in my Facebook newsfeed, and I thought it made an important point.


Because you know what? We’re all going to disagree on something. That’s okay with me. I may believe you’re wrong about some life issue or gay marriage. And I’l be happy to talk about my beliefs. I hope that is you’re wrong about something you learn the truth, and vice versa. But that doesn’t change your humanity. Or mine. Opinions and beliefs are part of our identities. But they’re not what we are.

5. Okay, so where do we go from here? I would suggest one step at a time. People are always going to be disappointed and mad after an election. But hey. We’re America. We’ve been through some TOUGH times, and we’ll probably survive a Trump presidency. Let’s keep going to work, raising families, making dinner, reaching out to each other, and living each of our lives trying to make the world a better place.

6. Want a lighter topic? Here’s an article of mine up last week at Live Action News: Why abortion is wrong: the pro-life case. And I’m kidding. It’s not lighter. But it might be helpful if you’ve ever been stumped trying to have that conversation!

7. And now, I believe it’s appropriate to end with a prayer for our country. They’ll know we are Christians by our love, right? Let’s live up to that! And let’s remember in our prayers all the brave souls who have fought for our country since today is Veteran’s Day.

Almighty God,
bless our nation
and make it true
to the ideas of freedom and justice
and brotherhood for all who make it great.

Guard us from war,
from fire and wind,
from compromise, fear, confusion.

Be close to our president and our statesmen;
give them vision and courage,
as they ponder decisions affecting peace
and the future of the world.

Make me more deeply aware of my heritage;
realizing not only my rights
but also my duties
and responsibilities as a citizen.

Make this great land
and all its people
know clearly Your will,
that they may fulfill
the destiny ordained for us
in the salvation of the nations,
and the restoring of all things in Christ.

That’s it for now! What do you think? Need to de-stress after this week? Share your reaction in the comments below!

3 thoughts on “7 Quick Takes, Vol. 64: In which we pull ourselves together”