Here’s the back ground: Apple (played by Vanessa Hudgens) grew up without her father and with her mother who was a drug addict (and had a partner who was abusive). The mother loved Apple to the extent of the welfare she received from her, though you can’t deny there was probably something deeper.

Apple got so fed up from being passed through the foster care system that she ran away to her father whom she had never met. She discovers he is married with the perfect two kids and working on Wall Street. Nice, right? Oh, and conveniently she’s pregnant at 16. Through a various series of events, she decides to keep the baby, but she doesn’t have a place to go.

Various acts of kindness from others land her at a women’s shelter for young mothers where she is able to learn to trust people for the first time. Apple grows in a big sisterhood powwow and there are lots of cute babies. The girls all come from diverse pasts, but are bound together with the tenacity they have and motivation they are given from their house mothers to become the person they dream of being.

It’s a story of Hope, really, which is the name Apple gives her daughter. That’s the underlying message. No matter what your past is, or what you’re faced with (unplanned babies, crazy mothers who stalk you, etc.), you can overcome your past. You are more than it. Apple proves that when she has Hope and makes a better life for her.

When I first heard of the movie Gimme Shelter, it surprised me what big name actors were in this kind of a movie. With such a life-affirming message, why would they be part of it? Interestingly, it was not made or marketed as a specifically pro-life film, but it certainly gives off that message. It’s certainly no Hollywood-esque type film, but it’s real. It made me cry at more than one part.

And dude. The babies are really cute 🙂

Another cool thing about the movie? It’s a real story. The woman who started the shelter is Kathy DiFiore (pictured below) who has a big heart for women who just need to be loved in a time when so much is going on. 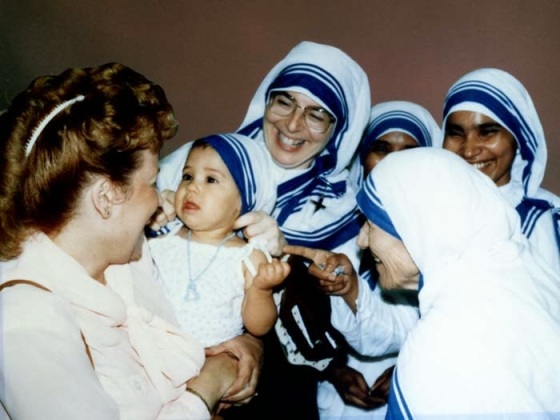 I highly recommend seeing this movie not because it’s the next Hollywood hit, but because it’s a real story of hope. Life bring so much joy, despite the circumstances. It probably won’t be out in theaters for too much longer, so go see it soon! If you have already, what did you think?