I have spent my entire life in the Catholic Church from being Baptized on Easter Sunday, less than a month after I was born, until now at 33. Somehow, somewhere along the way I was given the supernatural gift of faith, and even through high school, college, and my 20’s I have remained in the Church. I studied Theology in college with the intention of being a youth minister, and since graduating in 2007, I have worked for the Church or a Church-based organization all but a few months.

I say none of that to boast about ‘how Catholic I am,’ but to just explain the importance of the Church and her teachings in my life. I once ran a round-table discussion in college called “The Mis-Conceptions of Contraception” where we talked through all of the things we should know about contraception. This was when I learned the whys of what the Church teaches – the basics of what Pope Paul VI explained in Humane Vitae.

I was an eager college student studying theology, so none of the Church’s teachings seemed like a shock to my lifestyle. I wasn’t dating anyone, and knew that if I was, we wouldn’t be sleeping together before marriage. I also wanted desperately to be a mom to a lot of children (to be honest, I still do). I learned some of the medical truths about contraception including the risks that the woman takes on and other health issues. None of these are secrets, but they are either pushed under the rug or ignored in favor of so-called sexual freedom. I always knew that because of the risks, and my understanding of Catholic teaching, contraception would never be an option for me. [And just recently my doctor asked if I wanted her to prescribe something “to help with cramps,” and I asked “well, what would that be?” She of course said “the pill,” and I said, “I’ll stick with the ibuprofen.”]

In the midst of all this, I’ve been single the entire time, and we can define that as “extra single.” That is to say, none of my experiences with contraception have anything to do with my marriage or pregnancy (achieving or avoiding). However, I think they have a great deal to do with my life. Why is this? As a single woman, I am preparing for my future vocation, which I believe to be marriage. In this, I’m working on bending my will, sacrificing, and living a life of virtue. One of the virtues I’m trying to live out is chastity. This is not just “not having sex” but includes more of how I integrate my sexuality as a woman into the entirety of my life. It affects the way I dress, where I choose to spend my weekends, and how I think about myself.

It took me a lot of time, and a few counseling sessions, to get to a point where I can say (and truly believe) that “I’m worth this. I’m worthy of love. I’m worthy of greatness.” This isn’t boasting, it’s living in the truth of who God created me to be.

I also believe that contraception has a wide reach into our larger society’s culture, values, and habits.

In the 60’s when Humane Vitae was promulgated by Pope Paul VI, the rise of the second wave feminist movement was just beginning. He predicted that if we allowed the use of contraception (a fundamental tenet of the mainstream secular feminist movement then and now), we would see a rise in marital infidelity, a general lowering of moral standards, and a rise in disrespect for women. I believe all three of those have come to fruition, even in Catholic circles. Pope Paul VI was quite the prophet.

Contraception divorces sex from babies. I imagine this is an attractive idea to many people who enjoy the pleasurable nature of sex, and those throughout time who thought they should be able to experience that without the natural possibility of assuming the responsibility of raising a child. If I am blessed to be married, I’m certain there will be moments in our life that my husband and I will desire to be together without the prospect of a baby coming nine months later. It’s natural for us to be tempted by this thinking. But I also know that children are one of the primary reasons why God designed spouses to come together in this way free from barriers.

Our culture says the Church is oppressing us because she has restricted us from using contraception. However, when you live in the truth of the teaching, she is protecting us, respecting us, and upholding our dignity. The Church is protecting us from the physical and social consequences of putting our will, our pleasures, and our desires above what God has called us to. The Church respects women so much she doesn’t want them to be belittled, used for the pleasure of their bodies, and discarded. She upholds the dignity of the woman, the dignity of who she was created to be, and the dignity of her exquisite life-bearing nature.

Most people will say that this is hard to live out. I would agree, but just because something is difficult doesn’t mean that we shouldn’t do it. I don’t imagine that practicing NFP in my future marriage would be rainbows and sunshine every day. Nothing worthwhile is. I do believe that as a single person I’m preparing myself for it now by learning and embracing what the Church teaches and why.

I am practicing sacrifice when I invite a friend to stay with me for a few weeks while she’s in need during a hard transition.

I am practicing service when I make a meal for a friend or watch their little ones so they can have a date night.

I am practicing self-control when I deny myself an extra sweet or work out even when I don’t want to.

I am practicing love when I sit with friends listening to their struggles and encouraging them to stay strong.

I am practicing virtue now to build my muscles for when it’s harder.

Living the virtue of chastity (which is what Humane Vitae is all about at its core), isn’t easy, especially in our culture so intent on convincing us it’s useless. However, I’ve found without a shadow of a doubt that the Church is right and that living this way is worth it. I’m worth it. You’re worth it. 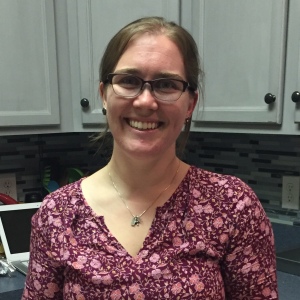 Katie has lived in Charlotte, North Carolina, for the last ten years. She loves Jesus, enjoys cooking, DIYing and decorating at home, reading lots of books (her goal in 2018 is 175!), and blogging about trying to grow in virtue. Her “day job” is helping Churches grow and thrive, so she travels a lot and chronicles her travel adventures on Instagram. No trip is without incident!

You can connect with her online over on Instagram and at her blog Becoming Perfectly Myself.

Want more of this series?

Part 2: Celebrating the responsibility of our creative power with Amy Thomas of Catholic Pilgrim

Part 3: Self Control and Our Ultimate Mission with Kristi Denoy of Hail Marry

Part 5: Moved by NFP with Heidi Indahl of Work and Play, Day by Day

Part 7 (the end): When God’s generosity meets the demands of conscience and sciencewith Leslie Sholly of Life in Every Limb

17 thoughts on “The Ripple Effect of Chastity in my Life {Freedom’s Calling, part 4}”