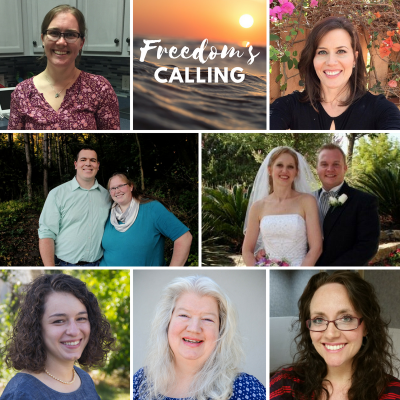 Fifteen years ago, I had no idea that I would one day join the Catholic Church. My husband and I were happily married in our mainline protestant congregation and enjoyed what we considered a perfectly pleasant married life, following a relatively typical dating period.

As our research into hormonal birth control alternatives went deeper, we began to come across the idea of openness to life and found there was a great deal of scriptural support. At the time, we were looking largely at the perspective of the quiverfull movement. We found a great deal that we agreed with in the quiverfull teachings, that opened our hearts to the possibilities of a God planned family, but ultimately it still felt incomplete.

Ultimately , we explored Natural Family Planning specifically due to a chance encounter of Sheila Kippley’s book, Breastfeeding and Natural Child Spacing, which I picked up at a local La Leche League meeting.

At first, I was simply looking for an alternative to birth control, but I found so much more.

As we began to learn and grow more, we began to be converted towards this idea of God’s design for our family. What were our complimentary contributions to be made to our married and family life? How did God want us to use NFP to be open to life? What were our duties as parents? What did that mean? I read Kimberly Hahn’s Graced and Gifted cover to cover more than once before even considering joining the Church. Within a few short years, I was pretty sure that Catholics had this family thing right.

Once we overcame the hurdle of artificial birth control in our marriage, the rest of the pieces to Theology of the Body and sacramental marriage began to snowball and build to the understanding we have today. Along the way, it became increasingly clear that we believed or at least agreed with essentially everything the Church teaches regarding human sexuality. Those beliefs became so entrenched in our understanding of our relationship that we could no longer find a mainstream protestant or evangelical church that would support them.

The Catholic Church was the only one that consistently lined up with our beliefs on life, contraception, and family.

I’ll never forget the look of relief on the priest’s face when, preparing us for our confirmation, he brought up the topic of the Church’s beautiful teachings on married life. You could tell he had been there before with couples, put in the position of trying to defend something that our culture fights so deeply against. To hear that we were already practicing NFP, that we already believed our duty as a married couple was to be open to life, was a pleasant surprise and a relief.

Still it took years before I ever heard the phrase Humanae Vitae and longer for me to realize it was a document I could read. My technical knowledge was late in coming and remains incomplete. From JPII’s Letter to Women (the first papal statement I ever read) to Humanae Vitae, each “discovery” of Church teachings on human sexuality and the unique dignity of each gender has added to my love of this truth.

Looking forward, the gifts of Humanae Vitae continue to unfold in our marriage and we pray that other couples, Catholic and not, can discover the freedom and beauty of our Church’s wisdom in right ordered relationships.

Heid is a Catholic author, blogger, and speaker. She and her husband live with their seven children on a small farm in southern Minnesota. Her book Blessed Is The Fruit of Thy Womb: Rosary Reflections for Miscarriage, Stillbirth, & Infant Loss, is available from Peanut Butter & Grace Publishing/Gracewatch Media. She is also a regular contributor to the Peanut Butter & Grace Family Time! newsletters on topics such as pregnancy & infant loss, liturgical living, and intentional family life. Look for announcements on new Peanut Butter & Grace print resources from Heidi later this summer. You can follow her over at her blog Work and Play, Day by Day, Instagram, and Facebook for the latest news.

Want more of this series?

Part 2: Celebrating the responsibility of our creative power with Amy Thomas of Catholic Pilgrim

Part 3: Self Control and Our Ultimate Mission with Kristi Denoy of Hail Marry

Part 4: The Ripple Effect of Chastity in my Life with Katie Herzing of Becoming Perfectly Myself

Part 7 (the end): When God’s generosity meets the demands of conscience and sciencewith Leslie Sholly of Life in Every Limb